It all started with a dream. When I was in 12th grade, I saw this Yamaha R1 one day in my area and I was overwhelmed by it. I went up to the guy and chatted with him for a while about the bike and clicked a few pics. I came home and updated my Hi5 profile (which I stopped using years ago, and had lost all the passwords), and wrote, “I’ll own this baby one day”. It can be seen even today… 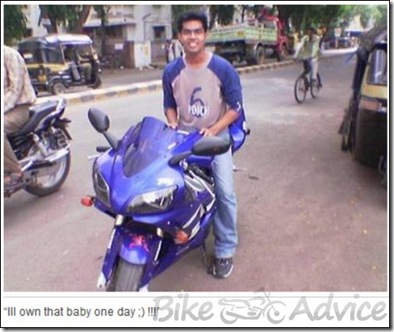 Present Day: Now coming to 2009. After I picked up the 220 DTSi, one of my good friends told me about this nice R1 on sale in Yamaha showroom, as the owner was picking up the VMAX. I got a good deal on it and bought it the next day. It had done just 1200 kms and was spanking new. In between I could have picked up a gray market bike, but I never wanted to take the risk.

R1 Looks: The bike, it’s just a beauty at any and every angle, it’s just too beautiful. You don’t need to be a good photographer for the pics to come out good. Just shoot the bike, in any angle, and it will still look just great. Some fellas in my building were asking me if I have got my R15 modified :)  . My mum also said it looks like the R15 :)  he he. I said, “Ma, never mind”. 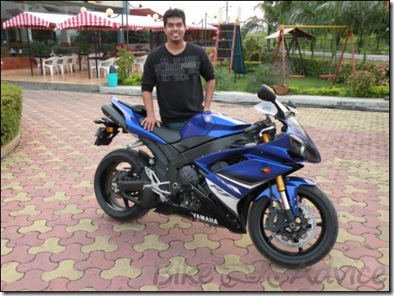 When you sit on it, you feel like God. Period. Well that’s at least how I felt. It’s quite comfortable actually, but not in traffic. In traffic you’ll get cooked with the heat.

Performance: The power and acceleration is mindblowing, nothing like what I’ve felt before. Actually after 7k rpm, the exhausts are no longer exhausts, but feel like rocket packs :). They feel as if they cannot support the amount of gases coming out, as if they were gonna tear the exhausts apart. You really have to be careful with your right hand. The day I picked up the bike, I was so full of josh that as soon as I got out of my building lane and came on the main road, I whacked open the throttle and straight away. I had the front tyre in the air. I was overwhelmed and scared at the same moment but somehow had to control my wrists. Also, I have to be careful with mud on the road, had a wheelspin once. 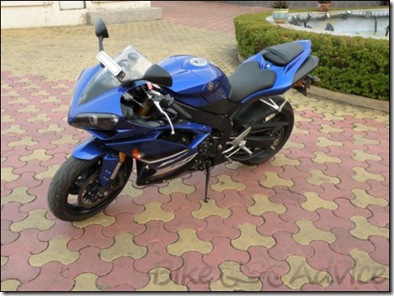 Handling & Comfort: The bike is actually very light and easy to handle. I never thought a SBK would be this easy to ride. The bike only looks heavy but it isn’t really that heavy. Brakes are good. I never use the rear one though. The front 6 piston calipers do their job very well. Max speed I’ve done with it is 190 on the Mumbai – Ahmedabad highway. Taking a U-turn at times could be a problem though, because of the large turning radius. Pillion comfort isn’t too good. But for a girl it isn’t too bad. All she has to do is hold you tight. ;) 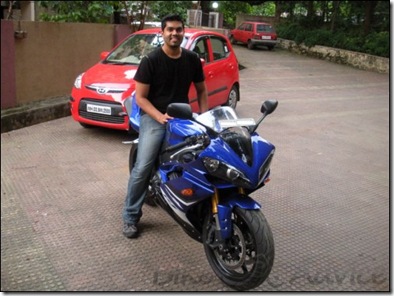 Lights & Plastic Parts: Lights couldn’t be better. The 2 projectors + 2 halogens are a sight at night. It’s more powerful than some of the cars we have. Sadly the 2010 R1 has only two lights. The fairing plastic quality is extremely poor. Even the R15 fairing is stronger than the r1. I was quite surprised to see such an expensive bike having such bad quality plastic. 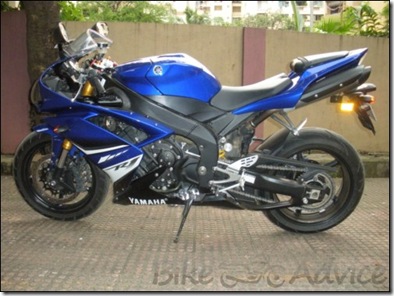 Conclusion: After using the bike for 4 months, unfortunately, I was leaving the country for some time so I decided to sell the bike. Managed to get a decent deal and that’s when I parted with the bike. 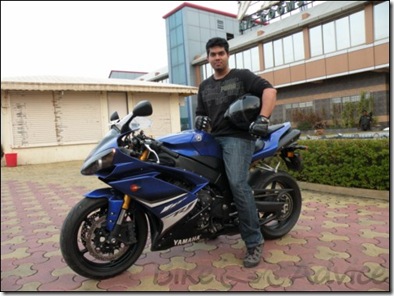 Even now as I’m sitting in Singapore writing this article, I dream of riding the R1 back home. Once you ride a SBK, It’s like an addiction. It’s difficult to stay away. Well, few more months from now, hopefully I should be writing another article on another SBK.